Aunty ABC Packs it in.

This is where I was born, virtually. The place I first consciously teleported to after dodging the horrors of Welcome Island and the Freebie Dungeon.(thankyou Nexus Whitfield, who may never know that he was the first friendly face I saw, my first calling card, and I'm forever in his debt) After that I hate to see it go. I came to Second Life shortly after reading that ABC Broadcasting had funded an island. That was quite a while ago, and we have mostly all moved on, as we all had things to go do, which is right and proper, and many also moved out of SL. But many of us made connections then. Some moved away entirely. I was one who visited the sandbox every few weeks, despite having my own place, and forging my own direction, ABC was always like coming home to Mum's. Cosy and safe, but that's our Aunty.

(Spew a bit if you like, but that proves you're Aussie) 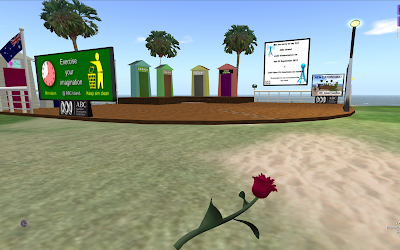 We had a lovely community thing going. And I could come rezz a few shitloads of prims for a bit, no questions asked.


This totally is not the most glamourous SL photo. ABC was never that. It wasn't pretty as such, but it was very real, and made it's people very happy.

The Sim may become unfunded, but I hope the group remains.

Posted by Tiffy Vella at 7:44 AM No comments:

It's finally all happening over at the Vintage Fair, and I love the build this year. There are three sims of everything vintagey, not just worn fashion.

Eclectica has Nouveau Leaves on sale... 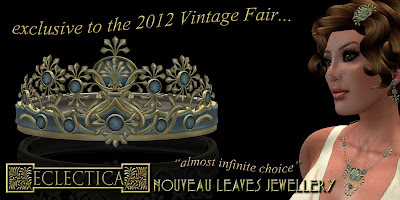 You can find the Eclectica store here on the Retro sim. 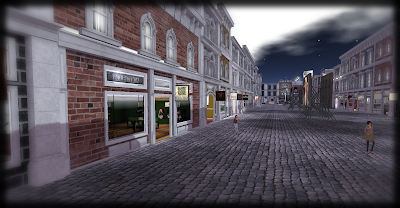 I did a little shopping and found the most gorgeousest couch there (the Jessie Couch made by Loz Hyde of meshworx), and had to run home fast to give the old one a heave-ho off the side of the skybox to make room. And retexture the rug which suddenly looked all daggy. This couch is mesh, has a land impact of 5, is copiable (so why not have two :) ) It has beautiful retexturing options, which I can't stop playing with becasue if anything will let me tweak it, I'll happily keep tweaking because that's half the fun. It has excellent animations, and will even make you a cup of coffee. 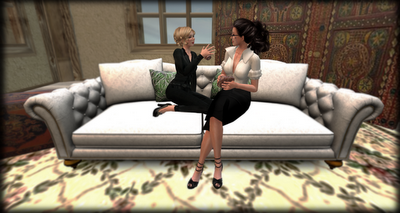 I've almost finished visiting all the stores, and have had a great time collecting demos, and making a shopping list.

Posted by Tiffy Vella at 8:22 AM No comments: