After a good three years, I've had a makeover. Well, at least the store did, as it was overdue a good bit of dermabrasion and freshening up. The layout seems to work well, the size is as big as I'd ever want it to be, but it began to look a bit tired, so my fingers got itchy.

The old logo and signage has served customers well, but what was once a rich dark gold began to look at little...."70's brown". No longer subtle and elegantly understated like I've been trying to convince everyone, but dull. Like nasty beer-smelling pub carpet. So it all got ripped out last week (finally!) and we had a great big bonfire down in the garden. Cockroaches either popped in the heat, or had to outrun a family of hungry meeroos. (He's not called "Snappy" for nothing, that little fawn teacup down there.) 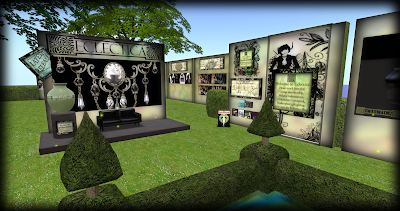 Now, after a few evenings with the paintbrush, it's all lighter and prettier, in line with the signage I started preferring for fairs and satellite stores a while back. I should have bitten the bullet ages ago, as this is so much nicer. It makes me want to break into song... 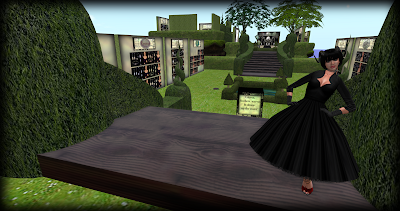 But of course, once the signs were replaced, the rest started to look a bit sad. Chuh! Isn't that typical of any DIY project! So those great big tortured megaprims underneath which were always meant to represent chunks of magically floating islands (stop laughing) needed to be swapped with actual floating islands (my shop was very square looking, made pre-sculpty technology). I'd tried sculpting my own, but it just never happened for me, so had to go on a shopping expedition. I found these made by Chiki Vita at ridi-ludi-fool. They are perfect! Moddable/copiable so I could scale them (any size up to 64m cubed these days so goodbye to all the awkward inflexible megaprims) and copy/drag them to wherever I needed. They need collision prims on top to make a good walkable surface, but thats no matter as it only makes the texturing easier, I say.

Then, of course, the old megaprim hedges suddenly looked too square and formal, so I sculpted some new rounded ones to smarten things up. Saved more prims too, which is always welcome. And then the ponds became sculpted in the same way, with more prim savings. 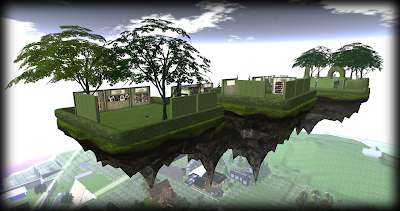 See, it's been one big domino effect. Even the blog header got the same treatment.

The stairs are next. They are now the primmiest thing in the store, and their days are numbered. (rubbing hands together gleefully) 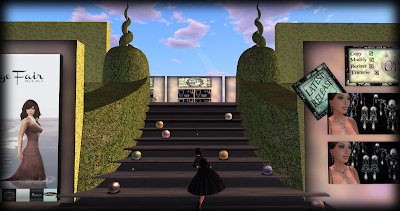